Between 06/01/2012 and 29/01, Eloy Flutes are in the flute fair hold by Sankyo Musical instruments shop at Teina ku, Sapporo, Hokkaido. 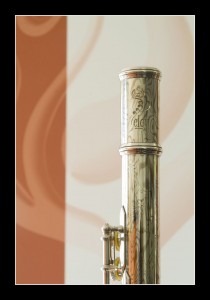 We assume that there are very few people have known the name of ELOY FLUTES.
The ELOY FLUTES was born in 2008 at Netherlands, which is a very new flute maker.
Their flutes are made by Harry van Ekert and his wife, Cilia van Uffelen, absolutely hand-made flutes. They make with their hands even a pin and a key.
Therefore their works create only 12 flutes in a year even if they worked without any rest.
The flute has her own name on and it is carved on herself.
Their flutes are not mass production, as the result, each flute has a character.
If you felt that is the one you wanted to play on ELOY FLUTES, that is the only yours and
the same one would not appear any more.
Would you like to meet the Eloy flute which enhance your playing?

There are only 3 flutes existing in Japan currently. (Present in 2012)
Two Mokumeumus (14K Redgold/silver tube and 14K Paradium white gold/silver tube) and
one 925 silver tube.
If you would like to see the flutes or inquire the brochures, please contact us directly first.
Dealer in Japan
World Frontier Co.,Ltd.