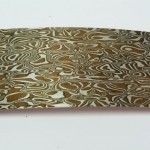 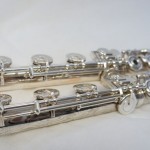 Mokumeum metal
Not only the material but also the special skill is required to maximize the insistence of ELOY FLUTES. Craftsman had been working for 2 years just to exploring this skill.
Using different kind of metal in one flute makes the sound brilliant. Alloy has the same percentage of metal in it. Mokumeum is the perfect material for the flutes because unlike alloy Mokumeum shows various colour in the flute.
Mokumeum was focused not for cosmetic reason but its sound.